Inspired by the changing seasons and forces of nature, Ellie’s expressive paintings depict wild seascapes and panoramic landscapes with energy and excitement. Using both gold and silver pigments, they change in appearance throughout the day as they capture and reflect light. 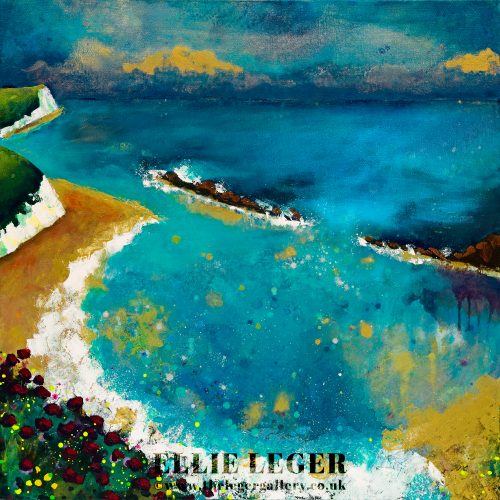 The Dorset coast line is so diverse as it stretches from the East to the West, from vast expanses of white sand and shallow waters to towering white cliffs, sheltered bays, miles of pebbles then crumbling sandstone cliffs so perilous in their nature that the locals are afraid to go near them.

Man O' War Beach could easily be in the Mediterranean with it’s teal tinted water. This painting reminds me to be grateful for what we have and to make the most of every sunny day! 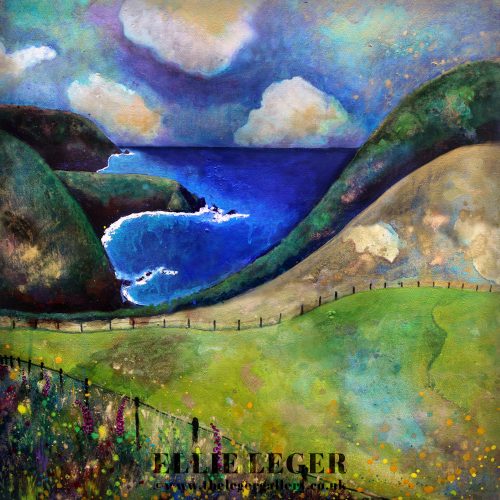 Dreaming of Devon is a very special painting to me, it marks a moment of realisation of self belief!

It is a painting of a memory of a beautiful view from the Valley of Rocks near Lynton in North Devon. It is not a literal representation of the landscape, more of a dreamscape.

I visited on a glorious summer day when the whole area was alive with the buzz of happy holiday makers exploring the landscape. I imagined the end of the summer season, the return to normality, and everyone dreaming of being back in Devon enjoying the warmth of the summer sunshine. 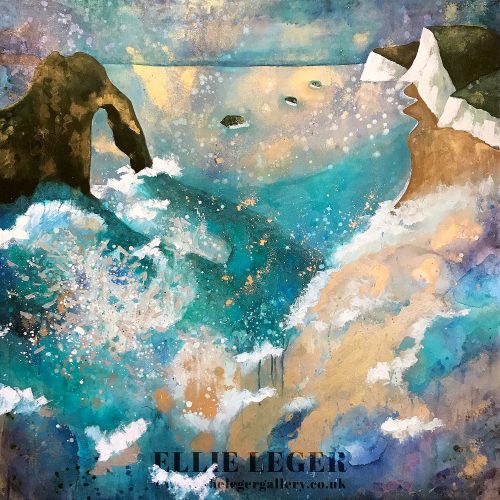 I painted 'Moonlight at Durdle Door' after a freak warm and sunny day in February. I was completely in awe at the vibrance of the water. The colours of the seascape were an exceptional contrast to the gloominess of the very grey and damp winter we were suffering in the chalk downs.

We enjoyed the feeling of the sun on our faces for the first time in months, took our socks off and basked in the sun. Rather dramatically as soon as the sun dropped in to the horizon the temperature plumeted, and the glorious bright day switched instantly into an icy cold night, full of moonlight and stars.

For me it is a painting of contrasts, warm and cold, day and night, summer and winter even wet and dry! 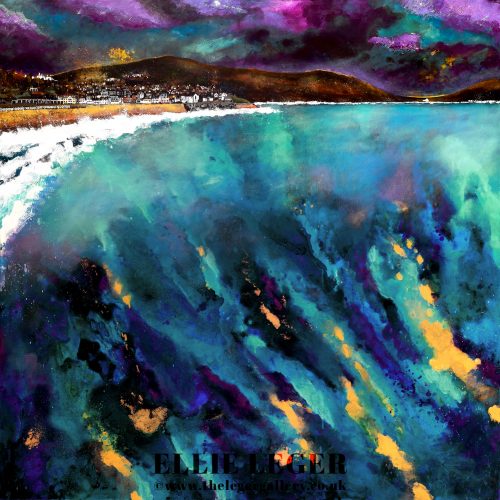 It was a very dull, grey Autumnal day, looking for inspiration I decided to go to Lyme Regis - not expecting too much due to the weather. I walked out on the harbour wall, with the sea crashing relentlessly against it, all of a sudden the clouds parted and Lyme was drenched in the most beautiful golden sunlight - as if rewarding me for braving the elements! 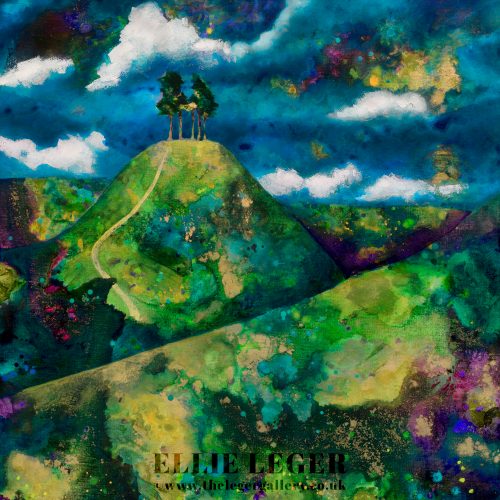 Colmer’s Hill is an iconic Dorset landmark. Since creating this painting I have discovered that it has a special place in the hearts of many people from across the Globe!

It is a magical experience to be on top of the hill, listening to the blustery sea wind blow through the majestic trees, whilst looking in awe at the incredible Dorset landscape.

This painting depicts the wildness of the place, while also capturing how the hill nestles gently into the landscape. Wild and gentle, happily coexisting simultaneously. 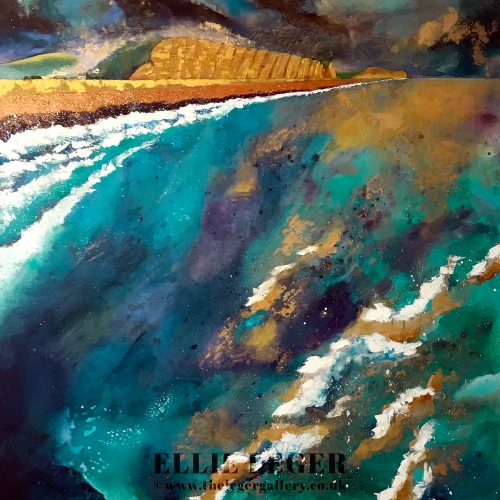 It's Going to be a Beautiful Day

There is something very magical about the summer sunrise at the beach, especially if you are the only person there! Waking up and watching the beautiful day unfold, from an empty beach with just birds for company to a busy, noisy beach full of happy childhood memories being made and people enjoying wonderful holidays, then slowly, slowly it returns to just the sound of the waves. Beautiful. 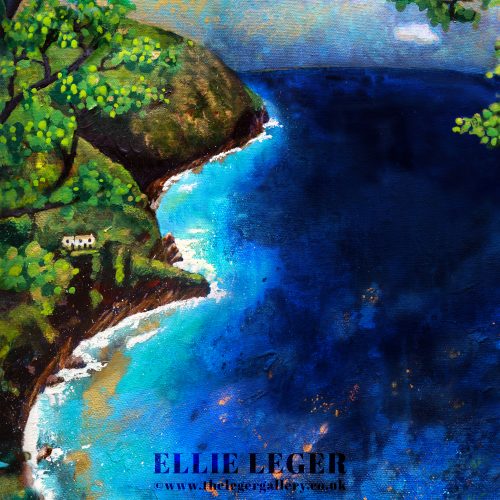 This painting was inspired by the first hot day of the summer, which by chance, we were very lucky to enjoy in North Devon.

The contrast between the bright sun beating down on the beach and the soft gentle sunlight filtering through the new summer leaves in the woods was mesmorising.

I was particularly interested in the vibrance and simplicity of the colours in the full sunlight compared with the softness and variation of woodland tones in the shade. 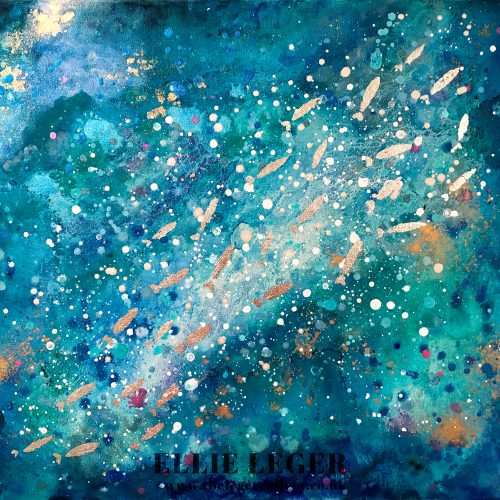 This painting was inspired by some of my happiest childhood memories spent snorkelling with my brother. It reminds me of how we would dive down into shoals of fish, sending them darting off in hundreds of different directions, their silver bodies reflecting the sunlight as they disappeared into the deeper blue water. 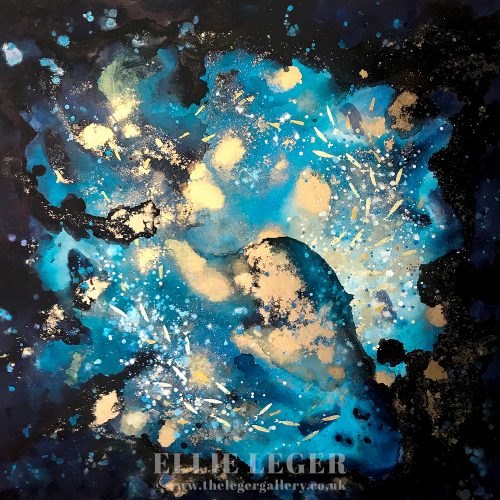 The magic of a Rock Pool! Like another Universe just waiting to be discovered - something different in each one.

As an adult I had forgotten the simple joy in exploring Rock Pools - what ever the weather! I love rediscovering the pass time with my children and remembering happy childhood afternoons spent clambering over slippery rocks, discovering hidden worlds!

Limited edition prints are available from various galleries, or you can order below.

*Please note the ‘Ellie Leger’ text on the images is just a watermark and does not feature on the actual print. 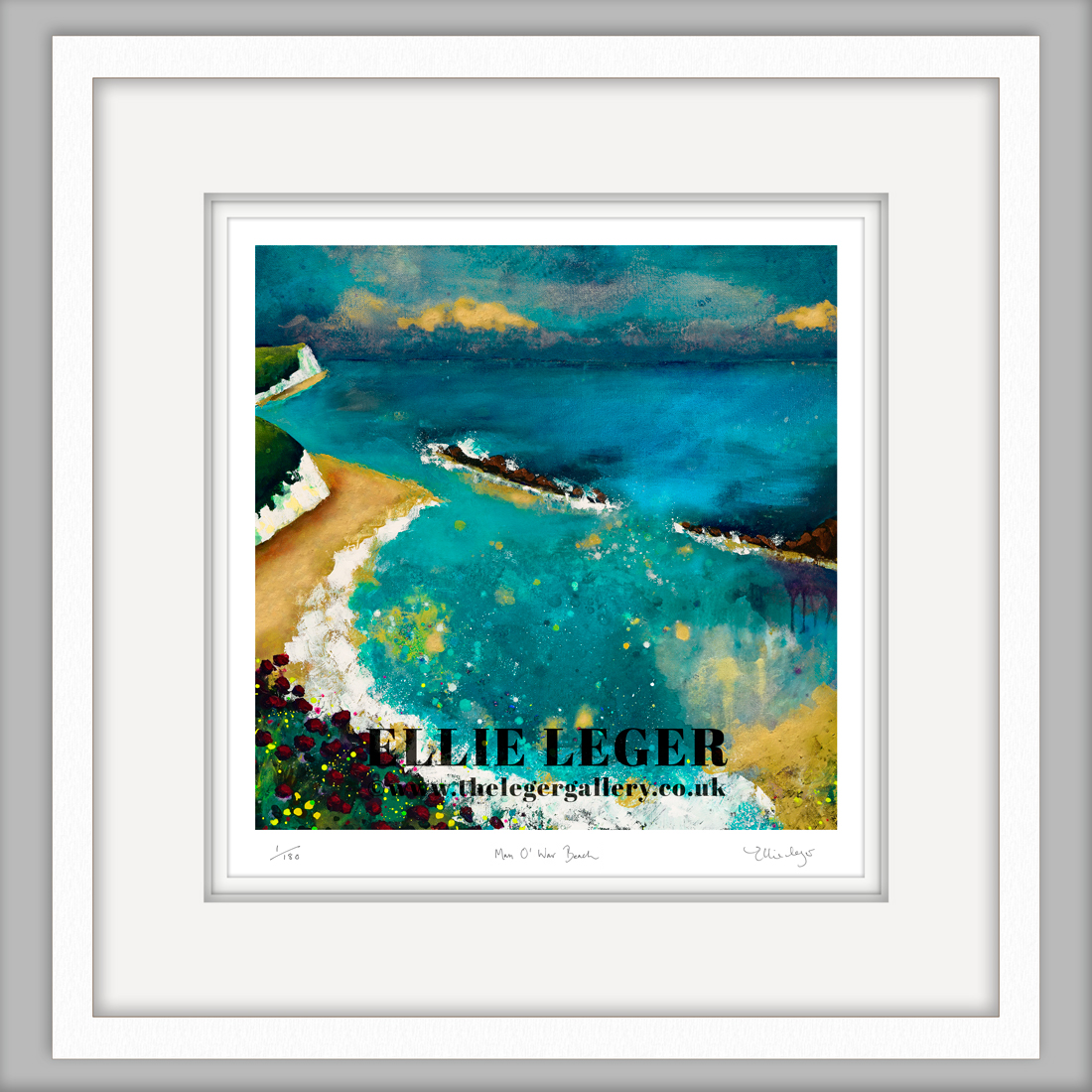 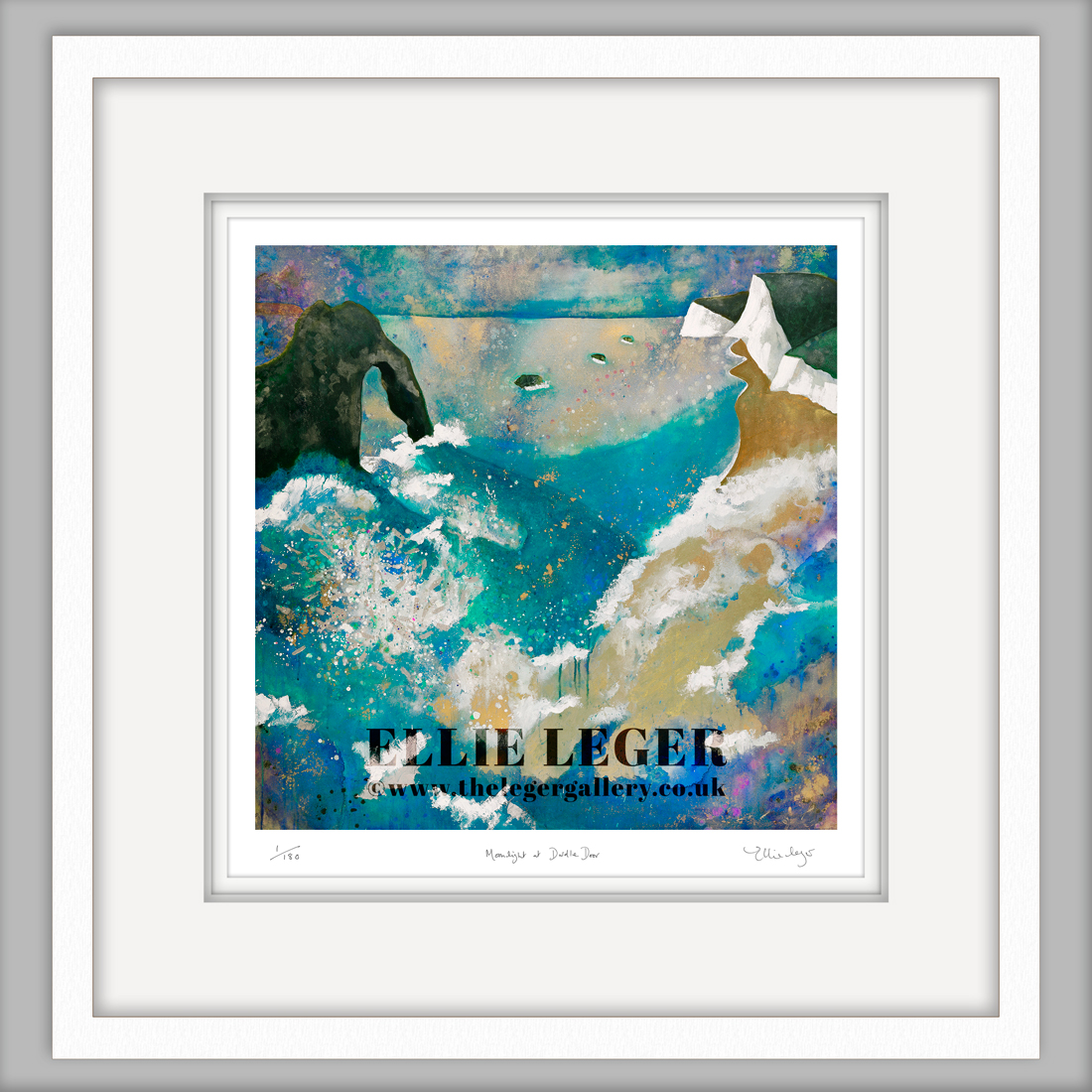 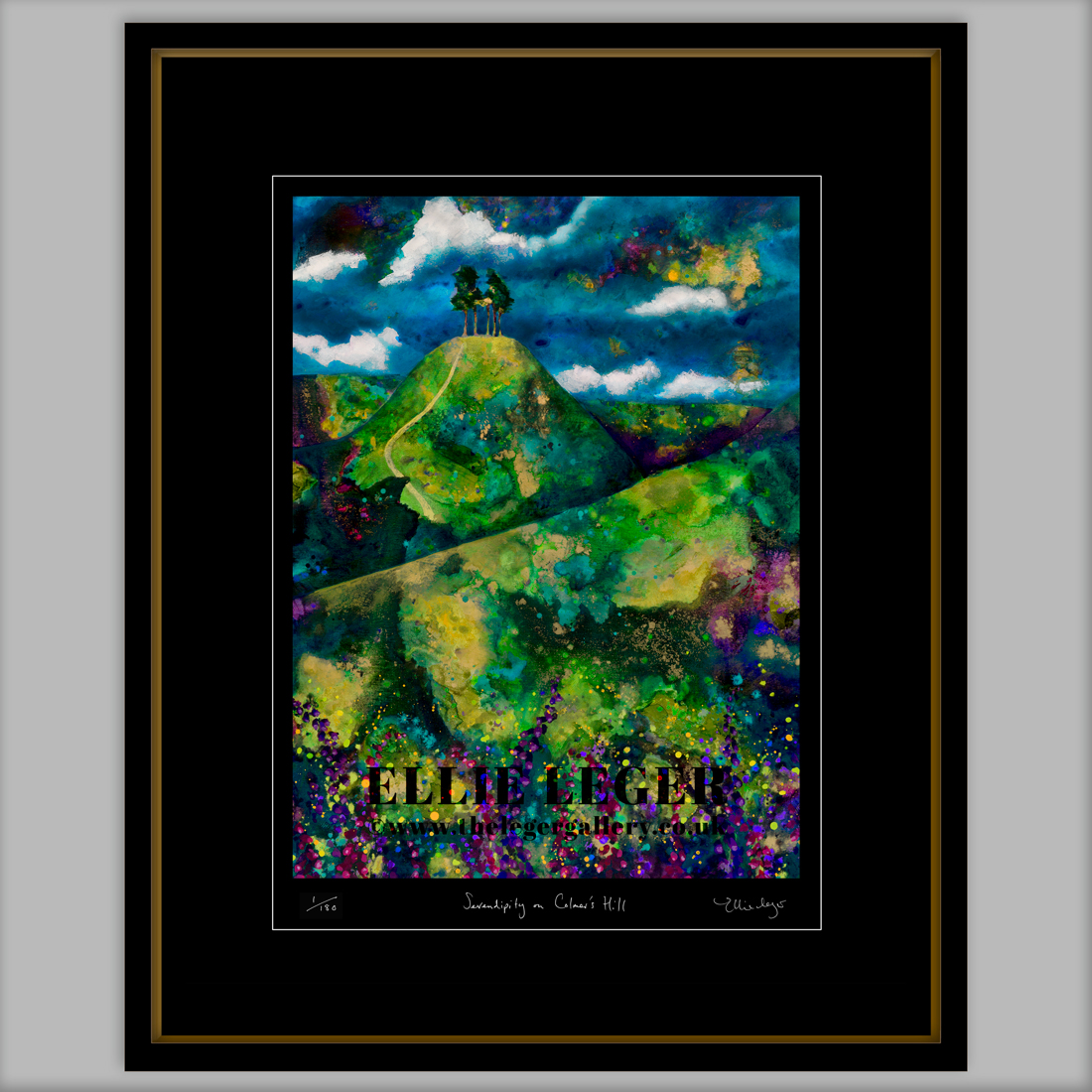 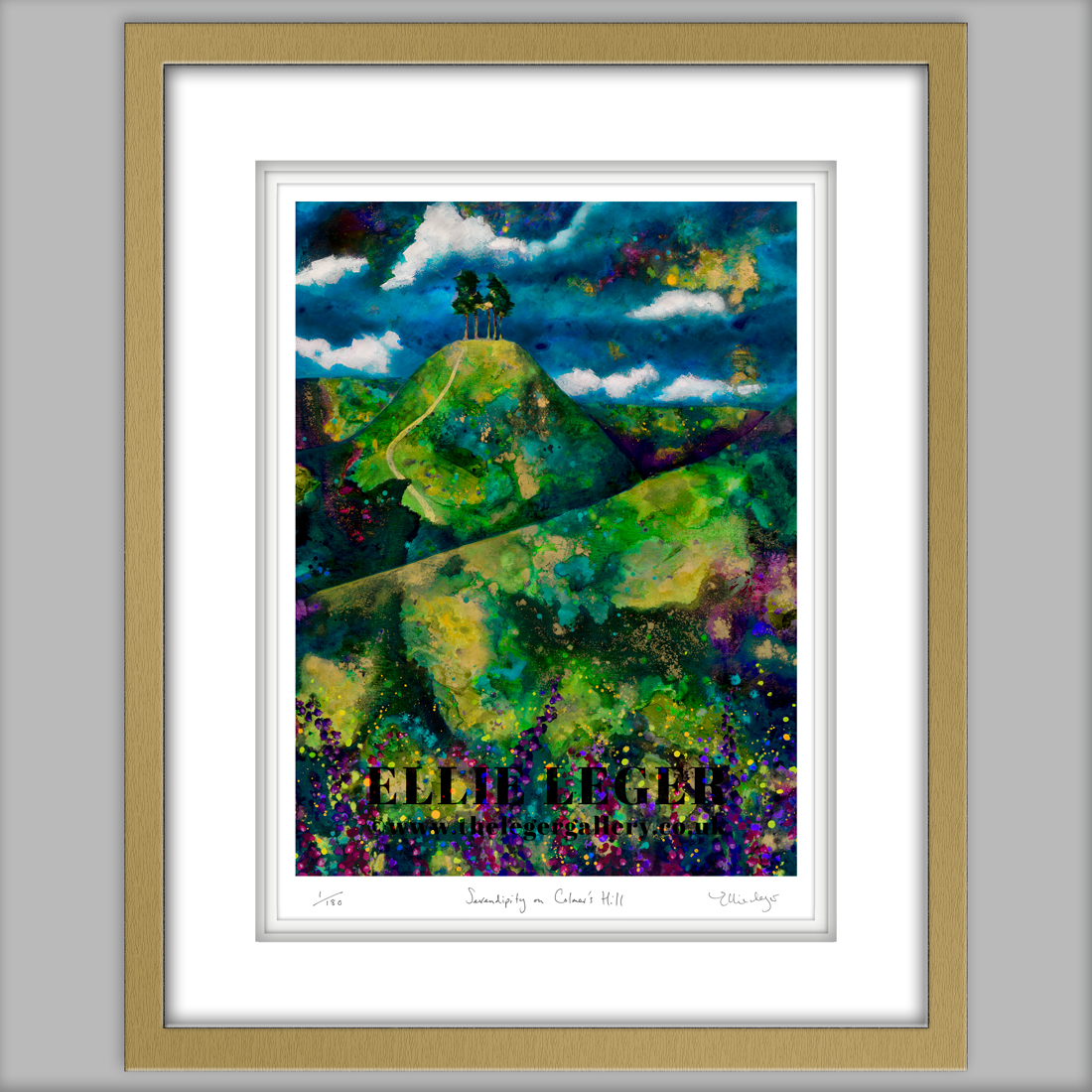 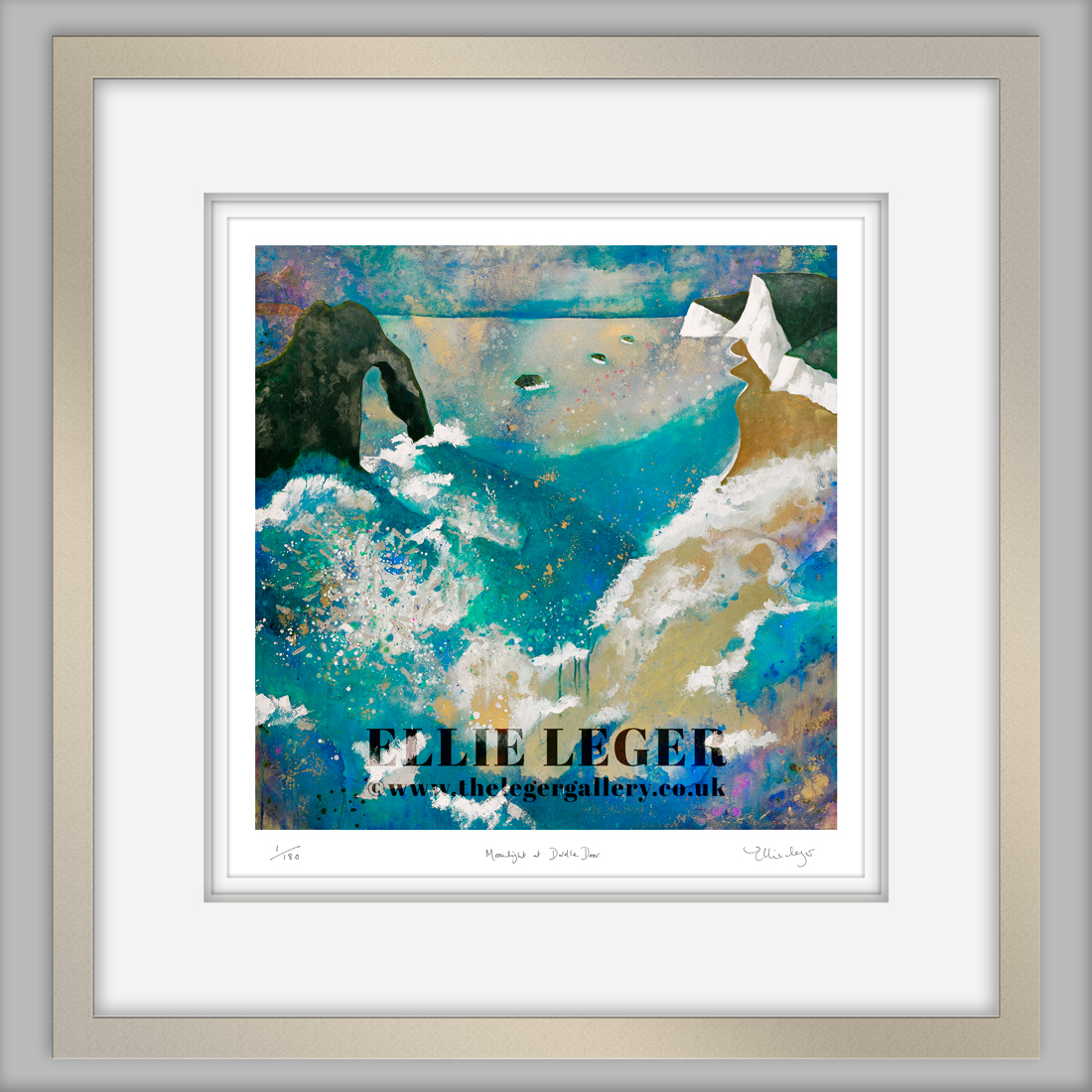 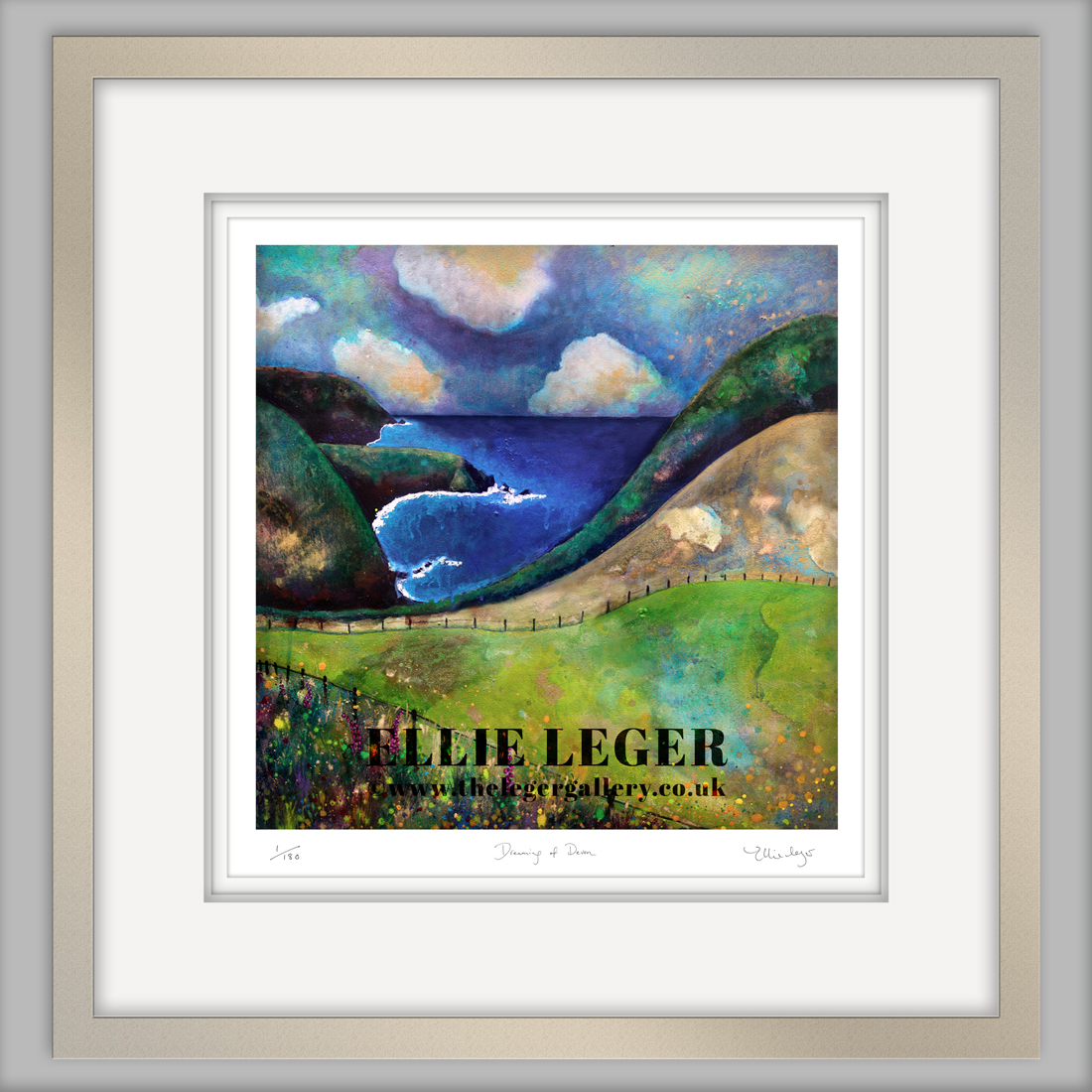 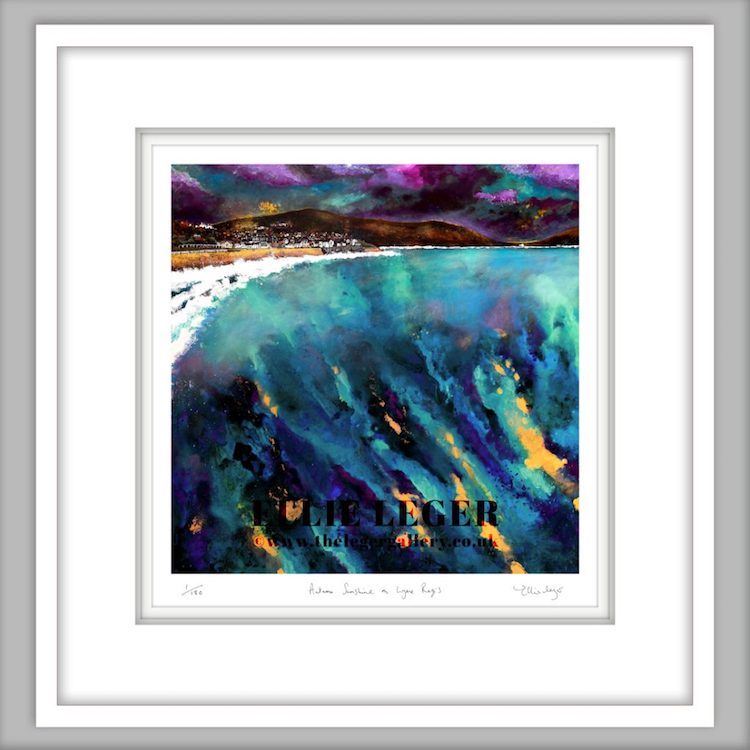 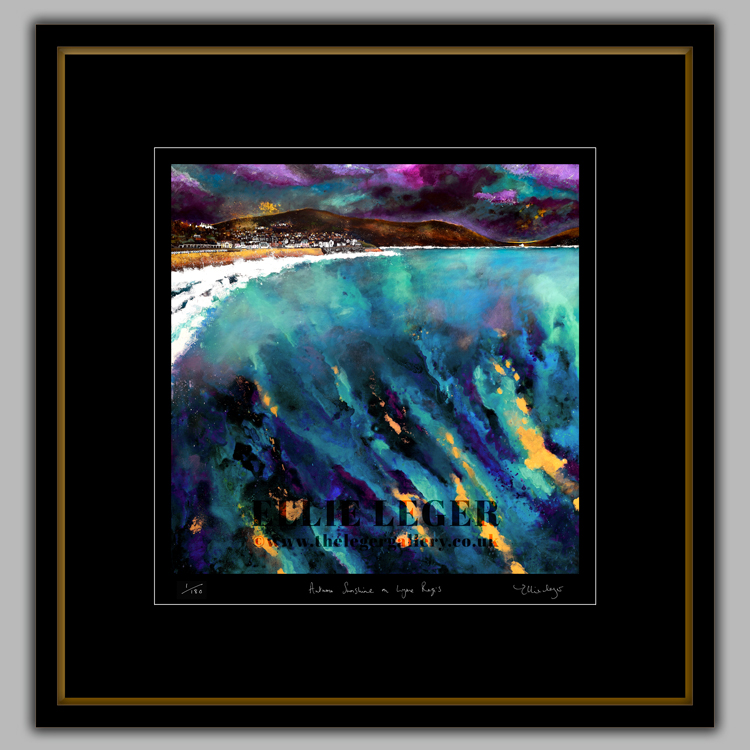 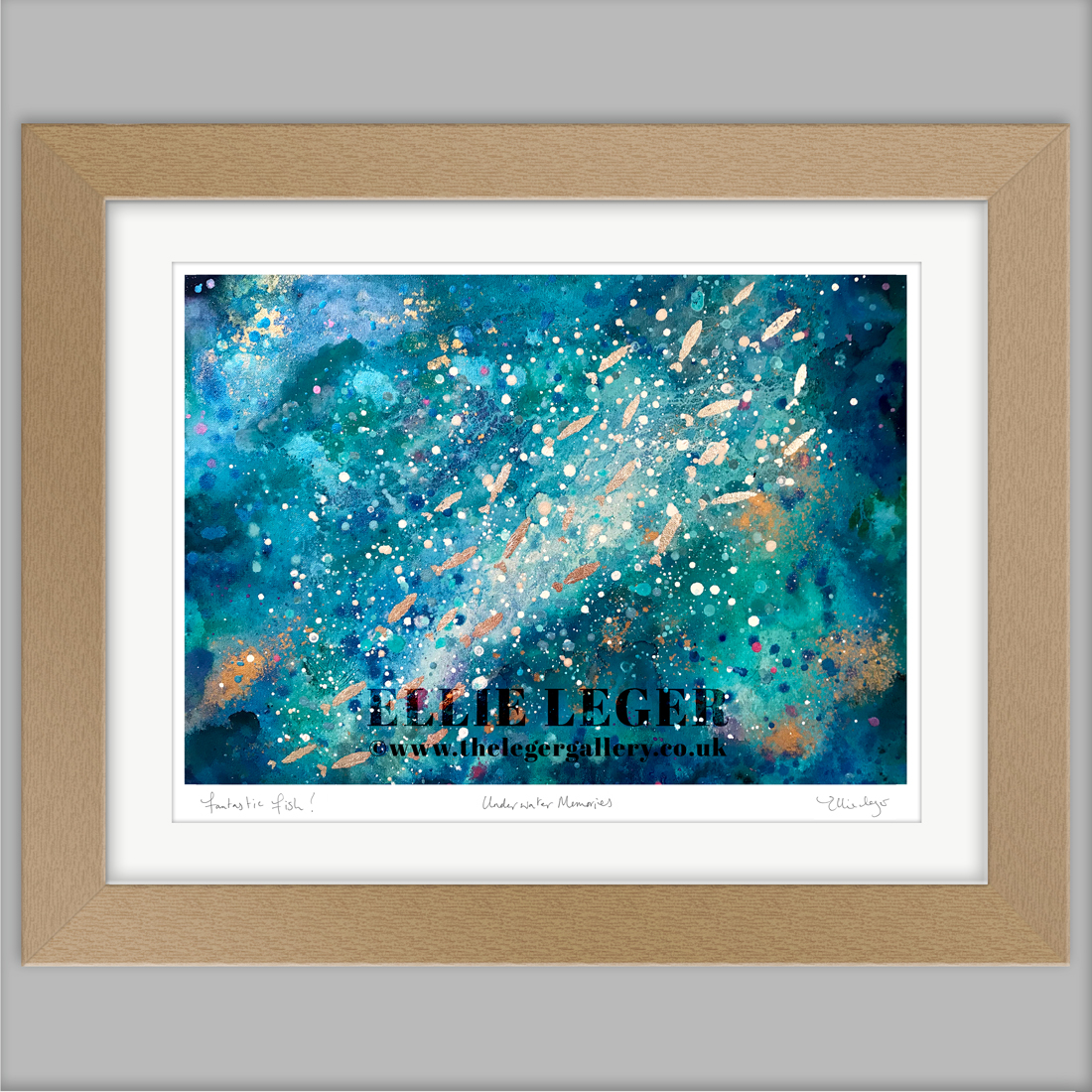 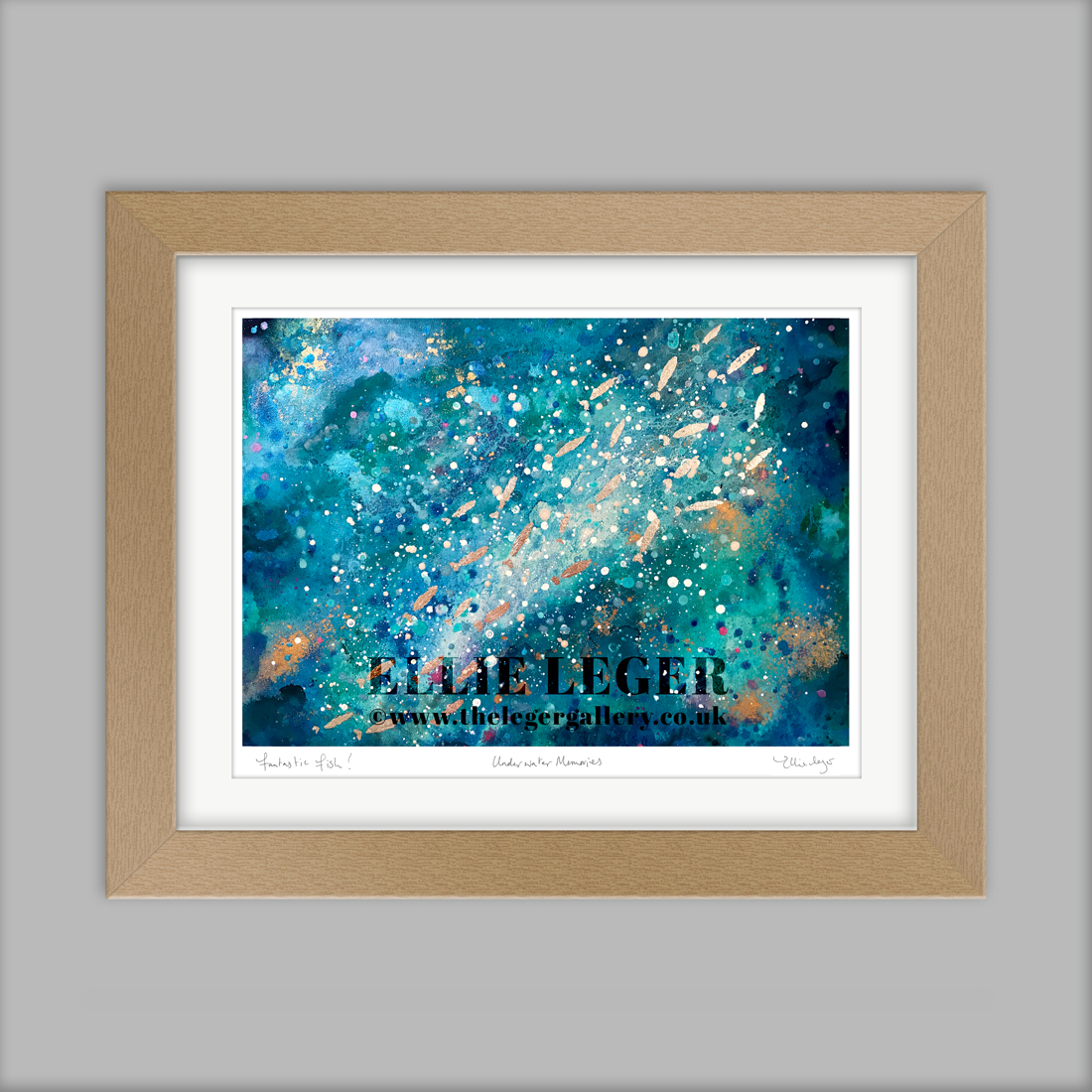 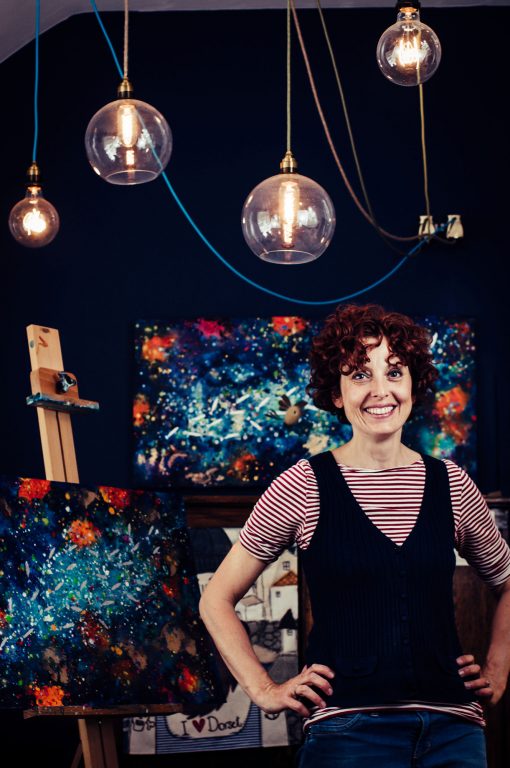 Ellie was born in Pembrokeshire and grew up between there and rural Oxfordshire, enjoying the contrasting landscapes. Her true love, since childhood, had always been paint, to paint and anything to do with paint!

She graduated in Decorative Art from Nottingham Trent University in 2000, initially working from a studio in Nottingham where she created prototypes for among others, Portmeirion Pottery and The Conran Shop. In the process of photographing and marketing her work, she taught herself Adobe Photoshop which led to a successful but accidental career in digital design. During her time working as a freelance Graphic Designer and Commercial Artist in Central London she worked for many global brands including Virgin and the BBC.

In 2008 she married the grandson of Harold Leger, a World-renowned Art Dealer and owner of The Leger Galleries, established in 1892 – see History, and in 2010 they discovered West Dorset, where she instantly fell in love with the rolling hills and beautiful beaches. On a whim, they left behind all they knew and moved to the tiny hamlet of Wynford Eagle where she delighted in being immersed in nature and surrounded by such exceptional countryside.

Sadly, in March 2020, Ellie passed away after being diagnosed with cancer. She is greatly missed by all of her family and friends. Her spirit lives on in her beautiful paintings and prints. 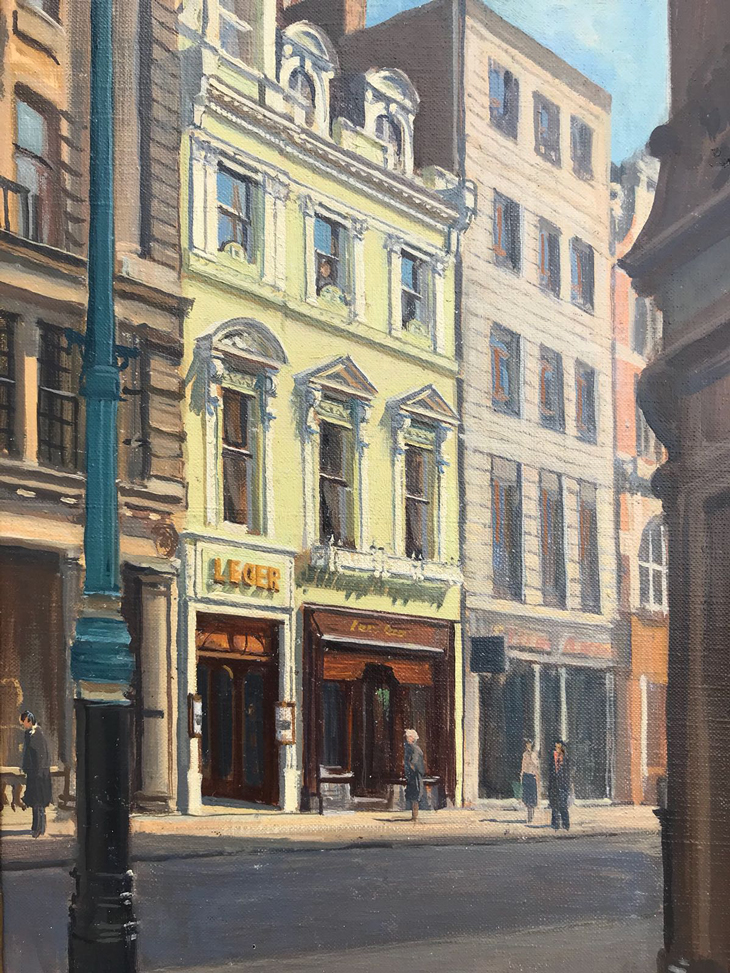 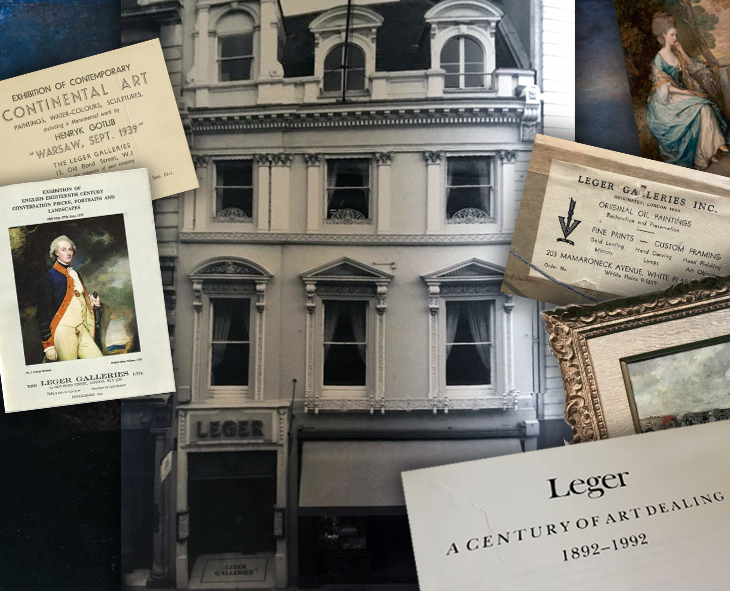 Joseph Leger was an artist and a picture restorer, he began to deal in paintings in 1892. In his first year of dealing, he sold several significant paintings including William Hogarth’s ‘The Heads of His Six Servants’, now in the Tate Gallery.

While fighting in the trenches during World War I, his son Harold Leger, dreamed of taking the Leger Gallery to a higher level. His diaries from the time detail his plans – which he actioned with great success. The gallery was then based in Duke Street, St. James’ but by 1930 he had leased an additional building, as well as moving to the slightly more prestigious Old Bond Street.

Harold Leger went on to establish galleries in New York, Brussels and in 1931 opened in Paris and Chicago. At the peak of its success, a second gallery in the Belgian capital made the Leger empire six galleries in all.

At the beginning of the 1930’s contemporary painting was introduced to the Leger. Exhibitions included Paul Nash, William Scott, Stanley Spencer, Charles Ginner, Jack Yeats, Edward Ardizzone and many more up-and-coming artists of that time. In 1996, the company was sold to the world-renowned coin and medal dealer Spink and Son. The gallery was renamed Spink Leger Pictures and continued to operate from its Old Bond Street premises until 2002.

The Leger Gallery catalogues are absolutely fascinating, containing countless images of incredible works of art. Many of the paintings that passed through the Leger Galleries are now in prestigious museums and public collections. Today picture dealers and collectors lament at finding a ‘Leger’ label on the back of a painting!